The Czech Republic is a landlocked country in Central Europe. Historically known as Bohemia, it is bordered by Austria to the south, Germany to the west, Poland to the northeast, and Slovakia to the southeast. It’s made of three key geographical regions known as Bohemia, Moravia, and Silesia. The capital and largest city is Prague.
The Duchy of Bohemia was founded in the late 9th century under Great Moravia. It was formally recognized as an Imperial State of the Holy Roman Empire in 1002 and became a kingdom in 1198. Following the Battle of Mohács in 1526, the whole Crown of Bohemia was gradually integrated into the (Roman Catholic) Habsburg monarchy. The Protestant Bohemian Revolt led to the Thirty Years’ War. After the Battle of the White Mountain in 1620, the Habsburgs consolidated their rule. With the dissolution of the Holy Empire in 1806, the Crown lands became part of the Austrian Empire.
In the 19th century, the Czech lands became more industrialized, and in 1918 most of it became part of the First Czechoslovak Republic following the collapse of the Austria-Hungarian Empire after World War I. (President Tomas G. Masaryk with the support of president W. Wilson). After the Munich Agreement in 1938, Nazi Germany systematically took control over the Czech lands. Czechoslovakia was restored in 1945 and became an Eastern Bloc communist state in 1948. Attempts at liberalization of the government and economy were suppressed by a Soviet-led invasion of the country during the Prague Spring in 1968. In November 1989, the Velvet Revolution ended Communist rule in the country, and on January 1, 1993, Czechoslovakia was dissolved, with its constituent states becoming the independent states of the Czech Republic and Slovakia. The first president of the Czech Republic was Václav Havel.
Today, the Czech Republic ranks as the 9th safest and most peaceful country and 31st in democratic governance. It is also one of the most irreligious countries in Europe. The Czech Republic is a member of NATO and the European Union.
Christianization in the 9th and 10th centuries introduced Western Catholic Christianity. Those first missionaries had translated parts of the Bible into the local Slavic language, which was uncommon in medieval times. After the Bohemian Reformation in the 15th & 16th centuries, most Czechs became followers of Jan Hus (i.e. Hussites) and other regional Protestant Reformers. However, when the Habsburgs regained control of Bohemia in 1620, the whole population was forcibly re-converted to Catholicism. Protestantism never recovered after the Counter-Reformation. One of the key historical, protestant movements was the Czech Brethren (also known as Bohemian/Moravian Brethren). They produced the main Czech translation of the Bible (Kralice Bible) that played a key role in forming the modern Czech language. They also devoted themselves to the world mission. Moravian missionaries played a key role for instance in the conversion of John Wesley. Their churches can be found to this day all over the world, including USA or Africa.
Today, the Czech Republic is one of the most irreligious countries in the world. According to the latest census (2021), there is about 5 mil. people without any professed religion and about 3 mil. that did not specify any beliefs. Altogether it is almost 80% of the population without any specific religious faith. Roman Catholics comprise about 9% and Protestants about 0,8% out of which evangelical denominations are barely 0,3%. Even though Czechs were introduced to Christianity a long time ago, they are now virtually devoid of any Christian beliefs, let alone Gospel-centered, Bible-believing ones. Today, Czech are very apathetic to faith. Even though they are not convinced atheists per se, they simply don’t care about believing in God.
More often than not, faith is an object of parody and humor for them. That can be seen for example in a steadily growing movement of the “Jedi” religion. In the last census, they were more numerous than the biggest evangelical denominations. It is a parody of religion by which Czechs are trying to show that religions are often as absurd as believing in the force of Jedis.
However, despite the current atheistic state of our country, we are confident that God has His people even among Czech and we are eager to be used as His instrument in reaching them for His glory. 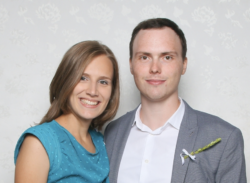