Myanmar, officially the Republic of the Union of Myanmar and also known as Burma, is a sovereign state in Southeast Asia bordered by Bangladesh, India, China, Laos, and Thailand. It is very diverse ethnically, representing eight major national races and 135 sub-groups and tribes. Although the country is rich in natural resources, most of the people live in poverty or at subsistence levels. Two-thirds of its children are malnourished, and the majority survive on less than $1/day. Inflation, political isolation, and the devastation of cyclone Nargis in 2008 combine to intensify the pressure on an already impoverished populace.

In Myanmar, the majority religion is Buddhism, representing more than 80% of the population. And although the constitution technically grants freedom of religion, many of the Christians experience persecution from religious and political majorities. Authorities generally disallow the construction of new church buildings and also severely limit the importation of Christian literature. Buddhism is deeply entrenched in the ethnic groups, and most of the children are educated in monasteries. Only about 5% of the population is evangelical, of which almost all are from minority ethnic backgrounds. Pray for a greater openness to Christianity and a more significant move of God’s Spirit among the majority people groups. 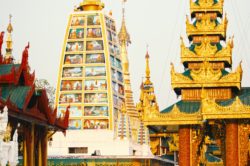